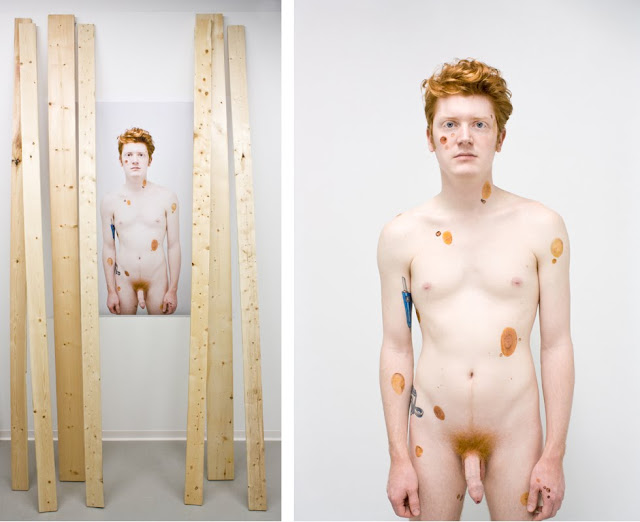 This week's MFA Fiber and Material Studies lecture will be presented by Matthew Schlagbaum. Matthew received a BA in Psychology and a BFA with a concentration in sculpture and extended media from the University of South Florida. He has shown extensively throughout his native state of Florida and is currently preparing for a solo show this fall in SAIC's SUGS Gallery. 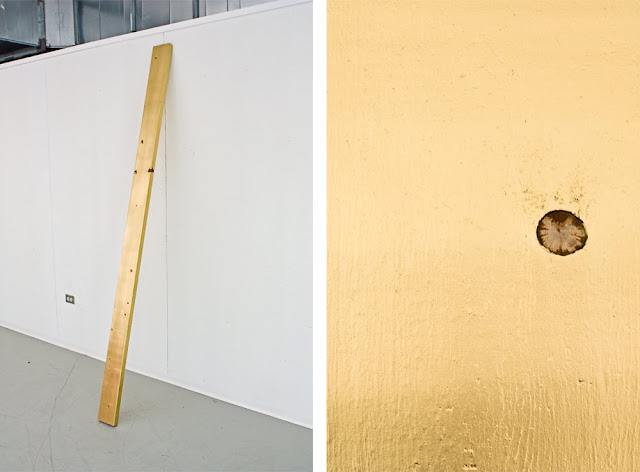 A complex identity develops in Schlagbaum's work which forged from elements he describes as, "Interpersonal relationships, maleness/manhood, and my feelings of embarrassment, guilt, numbness and shame."  In his system of upturned material hierarchies two-by-fours and dead house plants hold the same status as his finely edited photographs. In several he works draws attention to the knots in wood as a point of failure and a point of growth. He highlights the boards flaws by painting all but the knots a glimmering gold. Then in another piece heavily knotted wooden planks frame a photograph of his body covered in a temporary tattoos of knots. The gesture of placing the knots on his self-portrait speaks to an identity under attack and simultaneously anthropomorphizes the boards which frame it. 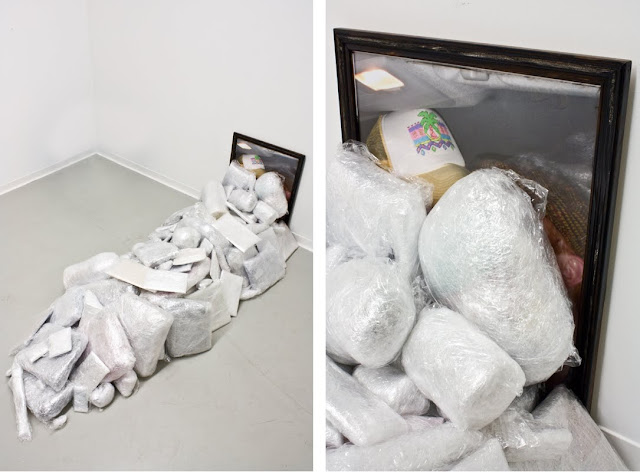 Schlagbaum's work is greatly informed by found materials which possess what some may consider a low value. When gathering materials for his studio he sees himself as a sort of organized hoarder. Matthews had transforms knick-knacks and rvinyl brick wallpaper in to objects with rich authentic values. His found object constructions balance a sense of instantaneous recognition and a laboriously constructed alienation. In the piece above he gathered gifts and tokens from his apartment whose only value was the sentimentality attached to them. He swaddled each object in saran wrap and arranged them in a grave-like formation propped against an obscured photograph from a past relationship. His grave of mementos emotes a sense of sadness and remind viewers of the frailness in their attachments to both objects and life. They become stand-ins for people in our lives who are no longer physically present. Like much of Schlagbaum's work this piece allows people to enter both the narrative of the artist and their own nervous psyche. 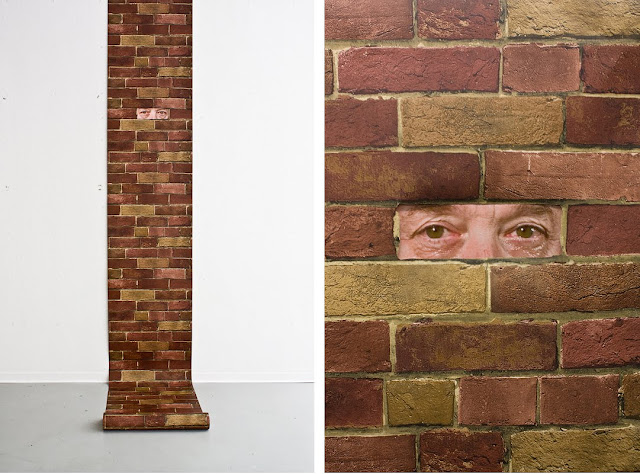 Matthew Schlagbaum's lecture is Wednesday, May 12th at 12:10 in Sharp 903 at 37 S. Wabash St., Chicago, IL. If you miss it be sure to check out his website to see past work and read his full resume.

This will be the final lecture in the Spring 2010 MFA Fiber and Material Studies Series. I will be taking a summer vacation from my blog and return in late August. When the semester begins next September I will feature short video interviews with each of the Fall 2010 lecturers.
Posted by Steven Frost at 1:14 AM