Barbara Wakefield will present this week’s Fiber and Material Studies lecture. Wakefield is currently a post-bac student and holds an undergraduate degree from Northeastern University in Studio Art. This past fall Wakefield showed her Ann Guilford Hankie Series at Dubhe Carreño Gallery in Chicago’s West loop. This summer she’ll be participating in a one-month residency in Berlin, Germany. The residency with will conclude with a solo exhibit of work created during her stay. 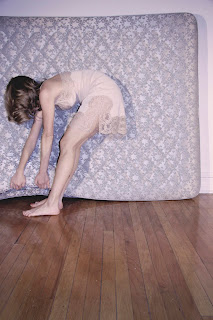 Wakefield’s work examines the hierarchy of domesticity and seeks to overturn the powers within it. The body becomes a battleground for her hierarchical confrontation. In her “mattress” photo/video, Wakefield not only inverts the body and mattress by struggling under its weight but she also inverts the role of the audience. Dressed in silky slip, Wakefield gaze is turned directly to the viewer. She breaks the fourth wall in manner often only seen in pornography. She remains powerful and above objectification choosing instead to confront the viewer with her frustration as if to say, “Want to give me a hand with this?” 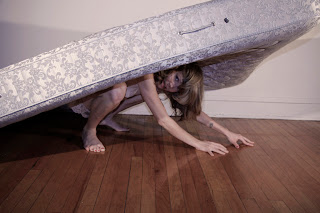 In Wakefield’s piece the mattress itself functions both as the essentialized mattress: a place to sleep, fuck, and die but it also as the body not seen in her work. In the tradition of Sarah Lucas, Tracey Emins, and Felix Gonzolez-Torez her double bed becomes a site of loss and power.

Early feminist performance and contemporary gender studies find their way into Wakefield new video/photo work Monumental Failure. The work shows her dressed in men’s under garments examining a cucumber she stuffed her y-fronts. Wakefield’s veggie-drag echoes Judith Butler’s assertion that gender presentation is always drag. The potencies of any given drag performance is measured not by girth but by bravado. Watch Wakefield’s video for a sampling of hers. 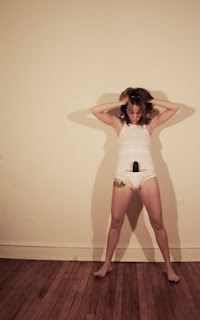 Barbara Wakefield’s lecture is Wednesday, March 17th at 12:10 in Sharp 903 at 37 S. Wabash St., Chicago, IL. If you miss her lecture be sure to check out the Dubhe Carreño website for her full CV and information on past work.