I will be presenting this week's MFA Fiber and Material Studies lecture. Instead of writing about myself I asked my colleague David R. Harper to be a guest blogger. I love Harper's work and am honored to have him talk about mine. 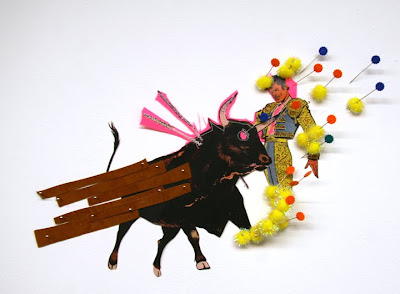 Steven Frost received his BFA from Alfred University, NY State College of Ceramics and Design in 2004 and furthered his educational career at the Corcoran College of Art + Design were he worked as an admissions counselor. Native to rural Vermont, Frost has exhibited his fiber-based objects, drawings and installations in a wide variety of venues and exhibitions across the US.

Steven has an insatiable ability to translate the tropes of both classical and contemporary representations of the male body into bright and intricately crafted works. Breaking down the walls that surround the myths of the male gaze, the often-allegorical nature of his work allows the viewer to think about the all told histories of classification. 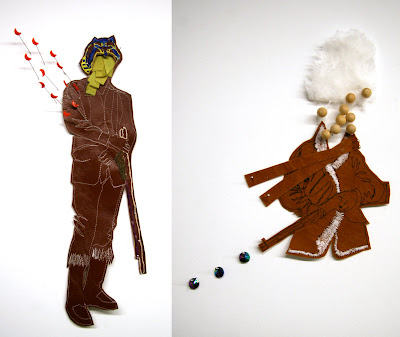 In his most recent figurative fiber based collages, Frost takes classical ideas of the masculine, and combines the images with the most eye catching embellishments of the crafter's catalog, the pom, the charmed tailors pin, and miscellaneous rickrack to create scenes of action and fervor. These works take the viewer and offer the opportunity to ruminate over how we are trained to see and interpret the ideas of the masculine. 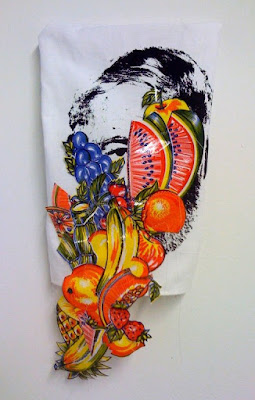 Most recently, Steven’s studio practice have been dedicated to a series of narrative performances involving elaborate costuming bearing the image of Ernest Hemmingway amongst other things. Frost is not using the face of Hemmingway lightly, he is considering how and what this man means in relation to the idea of the masculine and his role in literature and culture. Hemmingway often wrote about things that were too big to control, things such as the wilderness or social expectation, and there lies the great likeness to Frost’s work, where societal stock of the male form, and ideas of masculinity can shift and change from one glance to the next. 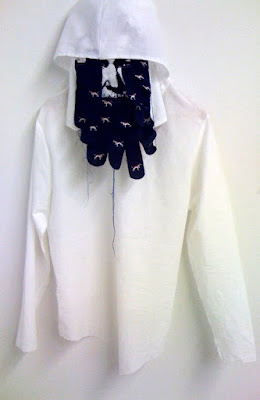 Next week's lecturer will be Janet Lin (Thursday 4/15).